2013
As if it Could – Works and Documents from the Herbert Foundation – Ouverture
poster, 42 x 60 cm

2013
Ouverture — As if it Could — Works and Documents from the Herbert Foundation
announcement cards, advertisements

The exhibition catalogue of Thomas Bayrle’s traveling retrospective has been nominated in the category “Museum Catalog of the Year” for Rob Pruitt’s 2013 Art Awards.

Ghent/Berlin: A Prior Magazine and 5th Berlin Biennial for Contemporary Art

Published by the collector

Published by the artist

This site contains a selection of printed matter made by Inge Ketelers, a Belgian graphic designer, who has been running her own studio since 1993. Alongside her studio practice she teaches graphic design at Sint-Lucas Visual Arts, Ghent (LUCA School of Arts). 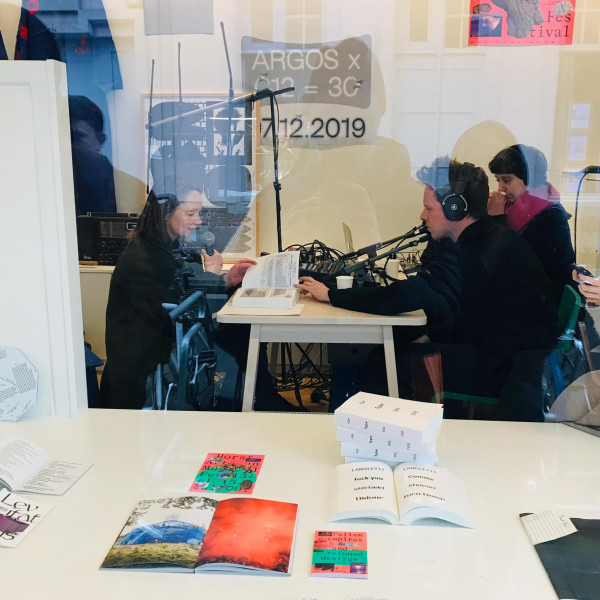 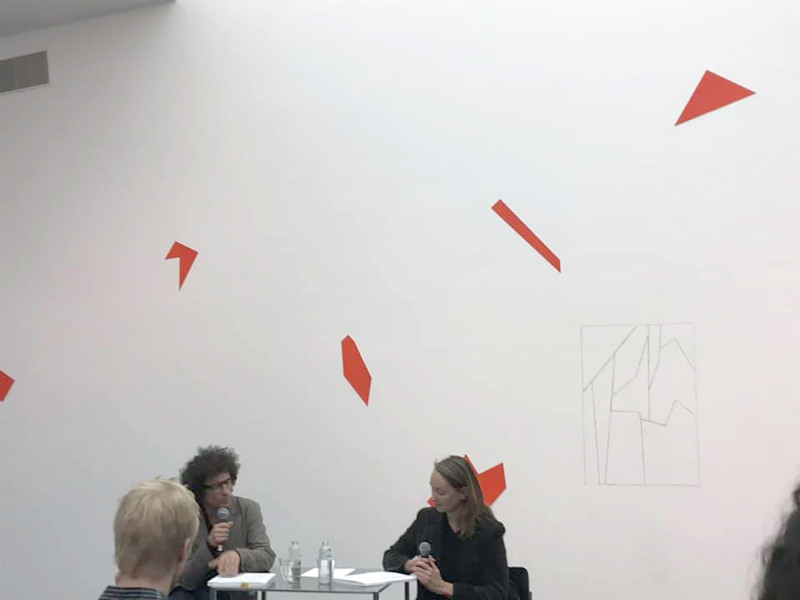 Contribution to BILL 2. A magazine of photo stories. Prioritizing visual reading without distraction.
A Place, a House, a Garden. A Life with Books and Trees, 2000–2018. For Dora. (In memory of the former architect’s home of Paul Soetaert.) 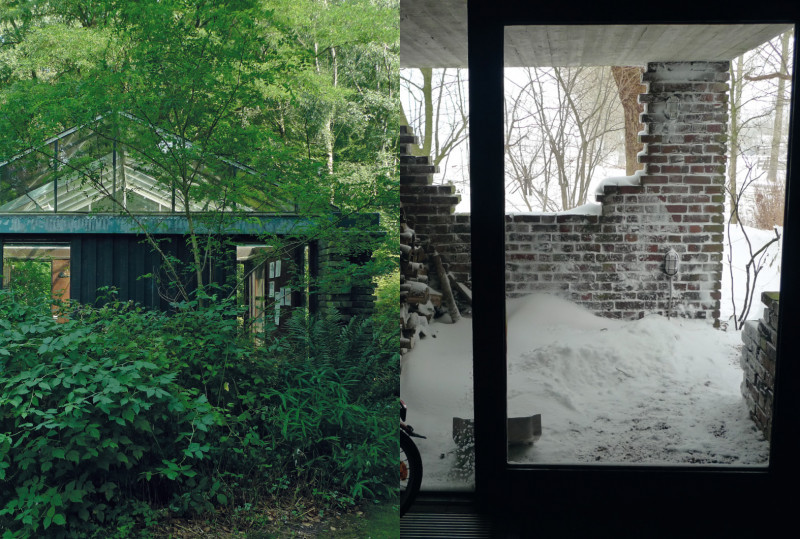 About the graphic design and typography for De Witte Raaf
Author: Florian Hardwig
Published by: Fonts In Use – Type at work in the real world (An independent archive of typography) on Apr 4th, 2018.

Reprint book Maarten Van Severen (second edition 2015, first edition 2000)
Originally published in 2000, this book is considered an intrinsic part of the Belgian furniture designer’s oeuvre. (The book was his first monography.) This new edition, published on the tenth anniversary of Van Severen’s death in 2005, offers a comprehensive overview of his many creations and inspirations through photomontage, slideshows of images, and an essay by Geert Bekaert. It shows how his ascetic tables, chairs, lamps, wardrobes, and more – designed for great simplicity and with modern materials – are synonymous with the feeling of a contemporary life. The book uncovers many aspects of his furniture, and reveals his work with Rem Koolhaas, Vitra and SMAK among others. This book is illustrated with plans, designs and sketches and has a list of exhibitions and works.

BoeckHerBerg
Second edition: 25.05.2014
Gouden Hoofd, Slachthuisstraat 96, Ghent
15:00-18:00, admission: free
Guests: Cox & Grusenmeyer, Evelien Bracke, Inge Ketelers, Jef Cuypers, Jeremy Van Humbeeck, Luca Beel, Ward Zwart.
For those who are curious about which books are treasured by artists, designers, musicians, curators and … come and have a look in the BoeckHerBerg. This event is initiated by graphic designers Laura Bergans and Anne De Boeck (BoeckBerg). BoeckHerBerg is an event about books and other printed matter, where you can have a look at the most inspiring books brought there by artists and other creative souls. But most of all, you can talk about it with them in person. It is a place for conversation, rather than a one-way talk like a lecture. 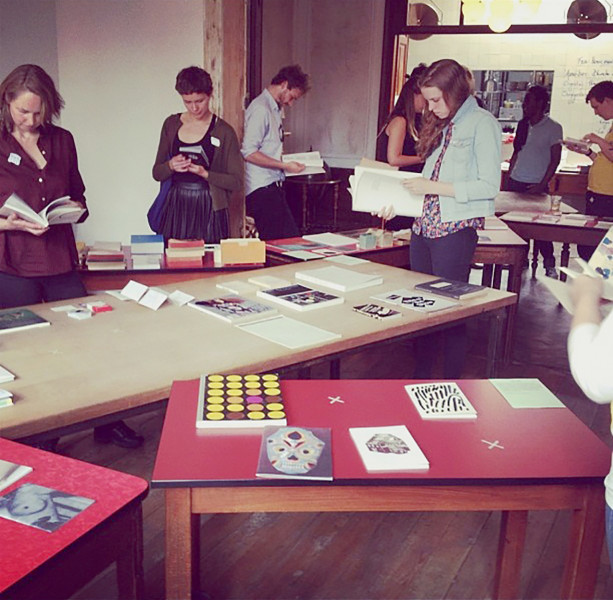 The exhibition catalogue of Thomas Bayrle’s traveling retrospective has been nominated in the category “Museum Catalog of the Year” for Rob Pruitt’s 2013 Art Awards.

Fernand Baudin Prize in London. Publisher of the Month at X Marks the Bökship. Exhibition of the prize-winning books. 8 June to 6 July 2013. The exhibition will be ponctuated with events throughout the month of June: *15 June 2013 at 3pm: Phil Baines talks with Leen Voet, Inge Ketelers and Michaël Bussaer about prize-winning book Felix. 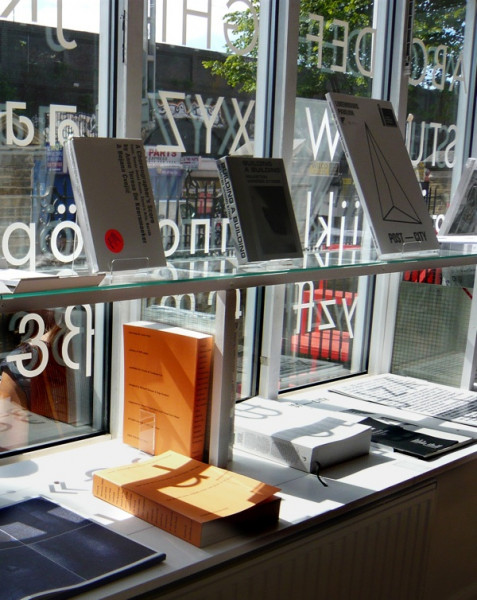 Laureate ‘Best Designed Books 2012’
The book ‘It’s a poor sort of memory that only works backwards. On the Work of Johan Grimonprez.’ is one of the laureates of the Best Designed Books 2012. This book was published by The Fruitmarket Gallery (Edinburgh), Blaffer Art Museum (Houston), S.M.A.K. (Ghent) in association with ARTIST ROOMS (Tate, National Galleries of Scotland), Beeldende Kunst Strombeek/Mechelen, KASK Faculty of Fine Arts (University College of Ghent).

“It’s a poor sort of memory that only works backwards.” On the Work of Johan Grimonprez.
Book signing by Johan Grimonprez. Armory Fair, VIP lounge. Friday, March 4th, 2011, 5:00 – 6:30pm. Presented by Sean Kelly Gallery.
Documenting the work of the critically acclaimed filmmaker, Johan Grimonprez, It’s a poor sort of memory that only works backwards is the most complete survey of the work of the Belgian artist. It assembles the most insightful dialogues and critiques of his major pieces, as well as for the very first time, fragments of the film scripts. Authors include Jodi Dean, Dany Nobus, Slavoj Žižek, Tom McCarthy, Chris Darke, Don DeLillo, Thomas Elsaesser, Alexander Provan, John Rumbiak, Catherine Bernard, Florence Montagnon and Simon Taylor.
Published by Hatje Cantz, the BLAFFER ART MUSEUM, FRUITMARKET GALLERY, Edinburgh, and S.M.A.K., Ghent, in conjunction with ARTIST ROOMS, TATE, and NATIONAL GALLERIES OF SCOTLAND, beeldende kunst STROMBEEK MECHELEN, and KASK Ghent, and with the generous support of Gallerie Kamel Mennour, Paris and the Sean Kelly Gallery, New York.

The Van Abbemuseum presented the publication ‘Ian Wilson – The Discussions’ on Sunday March 1st, 2009; a catalogue raisonné of all discussions by Ian Wilson between 1968 and 2008\. On the occasion of the release of this publication, Ian Wilson did host a new discussion.
After the discussion, the official book presentation took place and subsequently director of the Van Abbemuseum Charles Esche and former director Rudi Fuchs reviewed the book.

Marc Goethals will give a reading on November 6th, 2008 in De Singel (Antwerp) within the series of Curating the Library, an initiative by Moritz Kung. He will talk about a selection of artist’s books and some poems. As usual, the books will be added to the library. It is now already five years since artists, philosophers, architects, choreographers, designers and composers started presenting their favorite books as a contribution to this constantly expanding book collection. It’s just a coincidence that this reading by Marc Goethals (and Andrea Fraser who will present her selection too that evening) is number 100 in the series.

‘On Paper’, a special collaborative project by A Prior Magazine and 5th Berlin Biennial for Contemporary Art
‘On Paper’ consists of six separate publications and limited editions conceived by Ahmet Ögüt, Kristina Norman, Manon de Boer (see publication Two Times 4’33” in the list), Susanne Kriemann, Cezary Bodzianowski and Paulina Olowska.
‘On Paper’ will be presented at PRO-QM, Almstadtstrasse 48-50, 10119 Berlin, on Friday, April 4th, 2008 between 3 and 5 pm.
‘On Paper’ will further be on display and available at KW, Institut for Contemporary Art, Auguststrasse 69, 10117 Berlin and through the usual distribution network.


Concrete Poetry, Fluxus and Conceptual Art. A Book Friction
Witte Zaal, Posteernestraat 64, Ghent, from April 17th till May 24th 2008. Opening: April 17th, 20:00.
Collector Marc Goethals is setting up a unique exhibition showcasing artists’ books from the period 1968-1972. The exhibition traces how artists from the concrete poetry, Fluxus and conceptual art movements dealt with the medium of the book in their practices. Interactions between artists, mutual influences, sympathies as well as tensions are revealed. Books are shown from the publisher’s lists of Hansjörg Mayer (Herman de Vries, Dieter Roth, Gerhard Rühm, et al.) and Something Else Press (Fluxus artists Robert Filliou, George Brecht, Wolf Vostell, Dick Higgins et al.) and by artists such as Lawrence Weiner, Joseph Kosuth, Allan Kaprow, Gerhard Rühm and Stanley Brouwn. Apart from artists’ books, the exhibition shows magazines and presents a publication that contains an illustrated and annotated list.
This exhibition was produced by Jan Van Eyck Academie in Maastricht in 2006.

Web launching on April 23rd, 2007
At present this site shows a selection of printed matter, especially books, and to a lesser degree smaller works, such as invitations. The site will regularly be updated. This site has been made by Dominique Callewaert http://www.wetnet.com.